GAINESVILLE, Fla. — Canker topped the list of worries for the Florida citrus industry until citrus greening – described as the world’s most serious citrus disease – was found in groves last year.

“In the long term, the industry can live with and manage the canker problem, but citrus greening is a fatal disease that’s an even larger threat to the state’s signature crop,” said Harold Browning, director of the University of Florida’s Citrus Research and Education Center in Lake Alfred. “In other areas of the world where greening is a problem, it has never been successfully eradicated.”

The disease, which slowly weakens and kills all types of citrus trees, causes fruit to become lopsided and taste bitter, making it unusable. Fruit does not develop the desired color, hence the greening name. There is no known cure for the disease, which is on the U.S. Department of Agriculture’s select list of threats to plants and wildlife regulated by the Agricultural Bioterrorism Protection Act. Greening does not harm people.

Browning said the fatal bacterial disease is transmitted by the Asian citrus psyllid (Diaphorina citri), a tiny insect that is now widely distributed throughout Florida, and the disease has been found in more than 440 locations in 11 counties. Browning said it’s not practical to eradicate citrus greening, but the spread of the disease can be slowed with an effective integrated pest management program (IPM) that includes limited use of systemic insecticides and beneficial insects that attack the psyllid.

The introduction of a beneficial wasp was the first step in an expanded research program by UF’s Institute of Food and Agricultural Sciences to develop a wide range of best management practices to prevent greening from destroying the state’s $9.1 billion citrus industry, Browning said. UF researchers are also developing management programs to combat canker.

Marjorie Hoy, a UF professor of entomology and biological control expert, said the psyllid was first detected in two South Florida counties in June 1998. At the time, the psyllid was considered to be a significant pest, and although it did not appear to carry the deadly bacterial disease that causes citrus greening, it made establishment of greening more likely if the disease were introduced. Damage caused by the psyllid included stunting of new growth and sooty mold formation on the honeydew produced by the psyllids.

“When citrus greening started showing up in citrus trees across the state in September 2005, we knew that that we had a potential disaster on our hands, and that the psyllid was carrying and transmitting the deadly disease,” she said.

In an attempt to reduce populations of the Asian citrus psyllid, Hoy and Ru Nguyen, an entomologist with the Florida Department of Agriculture and Consumer Services, imported two natural enemies of the psyllid from Taiwan and Thailand. After evaluating the parasitic wasps under quarantine conditions to make sure they would be effective against the psyllid and not harm the environment, they began releasing the biological controls about six years ago.

“One of the beneficial wasps (Tamarixia radiata) is now widely established throughout Florida, feeding on the psyllids and reducing their population by as much as 80 percent in some locations between August and November,” Hoy said. “We’re also relying on naturally occurring predacious insects such lady beetles, lacewings and spiders that consume more than 90 percent of psyllid eggs and nymphs.”

Unfortunately, even one psyllid can transmit the deadly greening disease, so biological control cannot be the only tool in managing greening. Any control will require a holistic approach, Hoy said.

“Management tools that are developed should be compatible with these and other natural enemies that suppress citrus pests such as mites, whiteflies, scale insects, leafminers and mealybugs,” Hoy said. “Indiscriminate killing of their natural enemies could produce serious pest outbreaks.”

What complicates control of citrus greening is the fact that symptoms begin to show up in trees several years after the trees are infected by the psyllid insects, said Ron Brlansky, a professor of plant pathology at UF’s Lake Alfred center.

“Lack of early detection of the systemic bacterial disease is a major problem for the citrus industry,” he said. “Once the symptoms show up, it’s too late to save the tree.”

Brlansky said early symptoms such as leaf mottling and yellow discoloration may be mistaken for other problems such as nutritional deficiencies, and laboratory tests are needed to determine if greening is the problem. The disease can also be identified by cutting open small and poorly colored fruit and looking for aborted seeds.

He said the UF research program will attack the citrus greening problem in three ways by developing best management practices for the bacterial disease, improving diagnostic methods and testing the effectiveness of systemic insecticides to stop transmission of the disease by the psyllids. 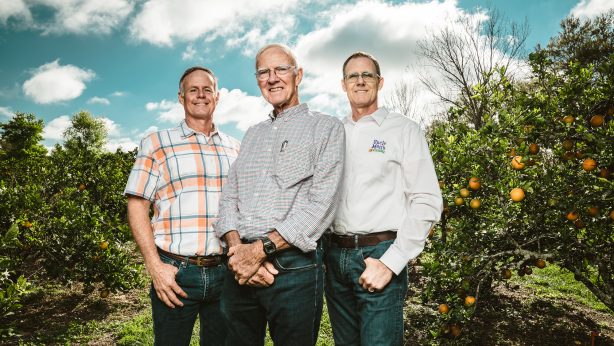 From the Grove: What’s Growing Behind-the-Scenes at Uncle Matt’s

Growing citrus is a family affair for the Uncle Matt’s...

10 Organic Crops in Season During the Holidays

‘Tis the season for large family dinners celebrating the bounty...