Pesticides haven’t worked. Quarantines have been useless. Now California citrus farmers have hired an assassin to knock off the intruder threatening their orchards.

The killer-for-hire is Tamarixia radiata, a tiny parasitic wasp imported from Pakistan.

Its mission: Rub out the Asian citrus psyllid, which has helped spread a disease that turns citrus fruit lumpy and bitter before destroying the trees.

The pest is wreaking havoc in Florida’s 32 citrus-growing counties. In California, it’s been detected in nine counties, most of them south of the commercial growing areas in the Central Valley. Farmers are hoping the Tamarixia wasp can help keep it that way.

The wasp, which flew coach in a carry-on bag from Pakistan’s Punjab region, is a parasite half the size of a chocolate sprinkle. But it kills psyllids like a horror movie monster, drinking their blood like a vampire. The female wasp can lay an egg in the psyllid’s belly. When it hatches, it devours its host.

The wasp “is going to be our number one weapon to control to Asian citrus pysllid,” said Mark Hoddle, an invasive species expert at UC Riverside, who, over several trips, brought legions of wasps to California.

“We have no other choice except to use this natural enemy or do nothing. And the ‘do nothing’ option is unacceptable.”

A tiny parasitic wasp imported from Pakistan is used to attack nymphs of Asian citrus psyllids.

So far, Hoddle and his teams have released more than 75,000 wasps across the Southland to beat back the disease, known as huanglongbing or citrus greening. The malady was first detected in California last November in a backyard citrus tree in Hacienda Heights.

The disease can lie dormant for a few years before tests are able to detect it, so experts suspect other trees are already infected.

“We’re looking for a needle in the haystack before it sticks us,” said Joel Nelsen, president of the California Citrus Mutual, a trade group.

The U.S. Department of Agriculture has enacted quarantines in nine states, including Florida, Texas and California. The quarantines prohibit interstate movement of citrus trees and require labeling of citrus nursery stocks from areas where greening has been detected.

In California, the quarantine covers nine counties. The northern border of the quarantine region had stretched across Santa Barbara, Ventura, Los Angeles and San Bernardino counties, but on Wednesday, agriculture officials expanded it to 178 square miles in Tulare County where the psyllid was detected.

That recent discovery raises the fear that the pest is creeping into prime citrus growing areas. It could threaten California’s $2-billion industry, which accounts for about 80% of the U.S. fresh market citrus production. Florida’s citrus is primarily processed for juice.

Since 2010, California growers have spent about $15 million yearly to fight the psyllid. Much of that money goes toward massive detection and awareness efforts. That’s on top of millions the federal government and state Department of Food and Agriculture have kicked in.

The psyllids don’t kill citrus trees. They’re merely the agent that spreads huanglongbing. An infected psyllid acts much like a dirty syringe flying from tree to tree, feeding and depositing a bacterium each time it unfurls its stinger.

Whether the killer wasp can bring the psyllid to heel remains to be seen.

Florida growers imported a strain of the wasp from Vietnam, but it proved ineffective. The predator never took hold, partly because there was not enough genetic diversity needed to establish a population, researchers said. Some Florida growers now are looking to develop genetically modified citrus that would be immune to greening — a controversial strategy that could turn off consumers.

In California, farmers are betting on the wasp — and on Hoddle and his wife, Christina. The UC Riverside entomology experts have spent their careers helping control invasive species around the world.

Since late 2011, they have been releasing the wasp, mainly in Los Angeles County. Agriculture officials halted pesticide spraying in the county this year, partly because it proved too cumbersome. Six out of 10 citrus trees in the county grow in backyards, making large-scale containment efforts difficult.

“This is ground zero for our war,” Hoddle said.

The goal is to reduce the psyllid population and provide a line of defense between urban areas in Southern California and the commercial growing zones.

The Hoddles and teams they’ve trained have been going neighborhood to neighborhood releasing thousands of wasps and tracking the parasites’ success.

The Hoddles conducted extensive testing to make sure the wasp wouldn’t disrupt California’s ecosystem, considering that past efforts at introducing non-native species have gone awry. 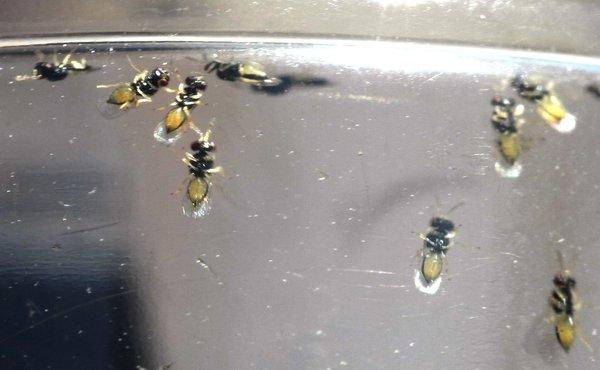 Tiny predatory wasps just before release on a citrus tree in Pico Rivera.

To satisfy the federal government’s concerns, the Hoddles quarantined the wasp for 18 months and performed several experiments to see whether it would attack native species. Time after time, the wasp attacked only the Asian citrus psyllid. After the researchers submitted a 60-page report to the Department of Agriculture, the release program was green lighted. The wasp poses no danger to humans or pets, Hoddle said.

On a recent weekday, the Hoddles drove to Pico Rivera. It was their third trip to the area, where most of the homes have unfenced front yards, providing easy access.

The back of their Toyota SUV contained their tools: a cooler with vials of wasps, a clipboard with log sheets and equipment to inspect citrus trees.

At each tree on their route, the procedure was the same: For one full minute, they circled the tree, counting the psyllids and looking for evidence that the wasp was preying on them. The psyllid, about the size of an aphid, is easy to spot.

The first few trees were unremarkable, and the Hoddles wondered whether the wasps had survived the winter.

It’s still too early to say the wasp releases are working, Christina Hoddle said. To confidently conclude that the wasp is slashing the psyllid’s numbers, at least three years of data are needed.

While the team is only about 18 months into the effort, some areas have shown promise. At some release sites, the psyllid population has been drastically cut.

At one of the last homes they visited, the Hoddles saw just how densely the psyllids can congregate. After getting permission to enter a fenced yard, they were dismayed to see one small, shrubby tree crawling with psyllids.

The pest had blanketed some of the branches in a sugary wax, an excrement of young psyllids.

The tree would need more aggressive treatment. Instead of one vial of wasps, Mark Hoddle reached for two. 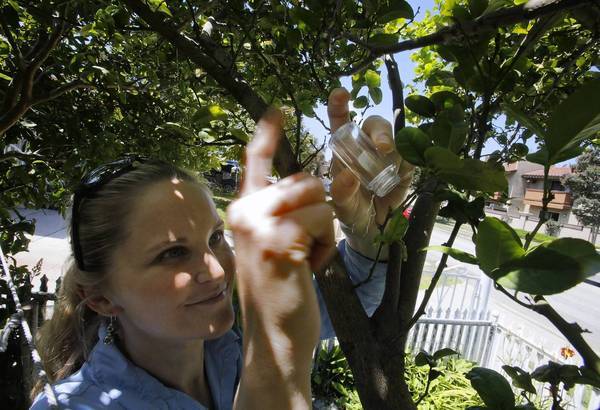 Entomologist Christina Hoddle releases a vial of predatory wasps in a citrus tree.

He carefully opened the first one, placing a small tree branch directly inside the vial’s opening.

The wasps wasted no time. “They’re all over these guys!” he said. “They’re going to town.”

After a few minutes, he tied the vial to the tree with a wire. The last wasps would wander out on their own later.

As their work wrapped up for the day, the Hoddles headed back to their car.

They would be visiting another neighborhood the next day. The battle would be a long slog, with no certain outcome.

“California has been preparing for this day,” Mark Hoddle said. “It’ll be hard to fault the citrus industry. I think they’ve done everything possible.”

Uncle Matt’s note: Since 2008 our farm program has included utilizing wasps to combat and control the psyllid population. View the video below and learn from Benny McLean, Production Manager, how this practice helps groves stay healthy.